Remember 1989?  Well, as argued by many scholars, that years was the culmination of global interactions that “dynamized in many places of the world crisis phenomena and synchronized, the resulting transformation processes Had they been previously locates primarily in a national framework, now its global dimension is obvious. Thus began both reflect on the established order of the world is understood relationship with their respective areas of sovereignty in the resolution, as well, should be designed as the new world order.” (Read more on 1989 in a Global Perspective). 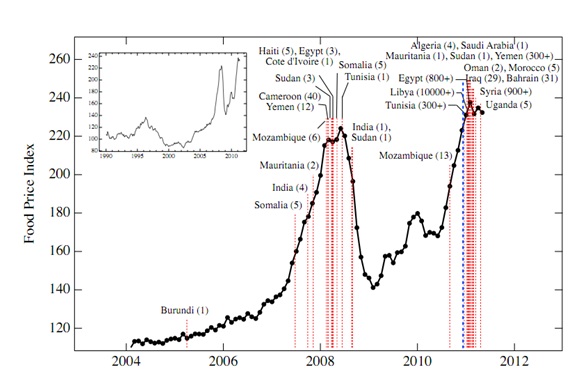 “The MIT Technology Review explains how CSI’s model works: “The evidence comes from two sources. The first is data gathered by the United Nations that plots the price of food against time, the so-called food price index of the Food and Agriculture Organisation of the UN. The second is the date of riots around the world, whatever their cause.” Plot the data, and it looks like this:……”