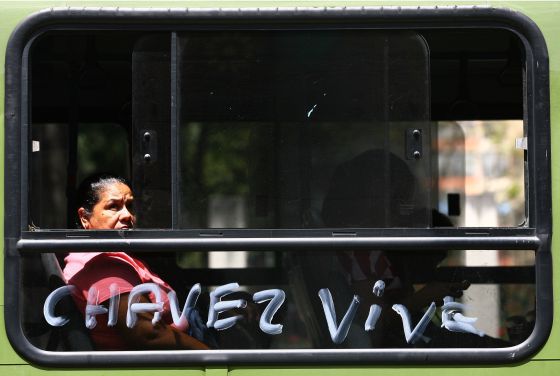 “God is dead. God remains dead. And we have killed him. Yet his shadow still looms. How shall we comfort ourselves, the murderers of all murderers? What was holiest and mightiest of all that the world has yet owned has bled to death under our knives: who will wipe this blood off us? What water is there for us to clean ourselves? What festivals of atonement, what sacred games shall we have to invent? Is not the greatness of this deed too great for us? Must we ourselves not become gods simply to appear worthy of it?”
—Nietzsche, The Gay Science, Section 125, tr. Walter Kaufmann

Overcoming the goods and bads of Mr. Chavez will not be any easy.  Eliminating redistribution of wealth programs will be almost impossible and the surrender of greater virtues like rationality, honesty, integrity, productivity and justice will be most surely sacrificed by the ruling leader for the sake of his reelection.  Even now that Mr. Chavez died, the Venezuelan Welfare State supports millions of its voters.  Just last year,  Venezuela added more than 800,000 people to the rolls of the state welfare system and  the number of pensioners reaches nearly 2.5 million, an increase of over 600 percent since 1999 in total pensions paid by the state, all of which are indexed to the national minimum wage (via venezuelanalysis.com).  Though he died, his party continues living and his ideas will continue been fostered in the form of more programs in the Venezuelan welfare state.  For this and many more reasons I say: Chavez is dead.

In a global scale the death of former President of Venezuela, Hugo Chávez Frías, will be very limited but noticeable for countries like China and Russia who benefited after Mr. Chavez expelled Western oil companies operating in the country and replaced them with Chinese and Russian state owned companies.  This oil companies were the most important strongholds of this two powerful countries in Latin America.

In a regional perspective the disappearance of this controversial figure will have important effects in Latin America as well.  Specially, around the league of the group ALBA (Spanish Acronyms for the Bolivarian Alliance for the Americas) in which he played an important role as its founder and main speaker against the North American interventionist policy.  Without Mr. Chavez the possibility of a halt of the oil donations to the member countries of this alliance could have an important significance as well. Venezuela donated millions of barrels of oil to needy Caribbean states, particularly Cuba, but also countries like Trinidad and Tobago and this countries in exchange commissioned their doctors to help in the most needed areas of Venezuela.  This symbolic gesture has been a constant diplomatic activity of the poor Caribbean states.

Also, Nicaragua benefited from Mr. Chavez anti-American policy.  The government of the former guerrilla leader Daniel Ortega and his party’s politburo have been recipient of more than $2.2 billion in Venezuelan petrodollars since 2007.  To them, the election of a member of the Chavez regime is fundamental to continue holding control of elections in the next term.  Further, the Pulitzer Center reports that “Since Ortega returned to power democratically in 2007, the wellspring of aid from ALBA — a bloc of eight left-leaning Latin American countries underwritten by Chavez — has provided the Sandinista government with an average of $500 million a year in loans, donations and oil credit. In 2011, Ortega’s ALBA allowance jumped to $609 million during his own re-election campaign.”  Showing how Venezuelan interventionism in the region was in occasions more powerful than the interventions of the United States of America that are historically hated and protested by leftists demagogues.

Venezuela has been officially (though in contravention to its Constitution) under the rule of the Vicepresident Nicolás Maduro since the death of Mr. Chavez.  He is now the interim President of Venezuelafollowing the death of Hugo Chávez.  Mr. Maduro will most probably run for the elections with very high chances of winning.  Before dying, Hugo Chavez ran for reelection in 2012 and got the vote of 55% of the voters.  His approval ratings among the poorest of the voters is very high and his main opponent, Henrique Capriles Radonski, will have it very difficult to win.  More important to note is the fact that Mr. Capriles is mentioned as being part of the Centre-Right of the country.  However, if elected his main policies may end up been very similar to the ones that gave popularity to Mr. Chavez.  He may thus be a centre-right from hand-to-mouth and a centre-left activist in practice.

Mr. Chavez ruled the country since February 2 1999 until 5 March 2013.  During his 14 years in power he reformed to his convenience the Venezuelan Constitution several times, created dozens of agencies formed by members of his party, formed hundreds of thousands of state-owned cooperatives, fuelled billions of dollars in his stated goal to lower inequality in the access to basic nutrition, and to achieve food sovereignty for Venezuela.  Further, he placed Venezuela at the centre of the regional foreign policy with states in Africa, Asia and Europe.