It is with Napoleon’s astonishing remark that I decided to give you some light of what Globalization refers to and why I choose to write about it as one of the two pillars of my research.

The term Globalization (also referred to as Globalisation) refers to what many different historians considered a process of interrelation (or unification) of the world. It was a process of cultural, political and economic relations that for the first time in history united all mankind.

It has been the aim of historians to identify When does Globalization begun and How it begun.  But also, it has been their aim to question if Globalization as a process has already concluded or if it is an ongoing process in the 21st. Century.  As well, historians are still trying to explain if Globalization should be judged (or not) as the result of only positive (good) results in regard to increasing the wealth, culture and technology of the world; while other historians argue that Globalization has also resulted in poverty, losses, conquest and cannibalization.

Globalization has been studied from different approaches in Social Sciences. Sociologists and Anthropologists have focused on the cultural effects that the transfer of technology, mass migrations, institutions and products has had in different regions of the world. Political Theorists studied how Globalization affects the institutions, norms and hierarchical authorities in specific regions and how changes in other regions may have had altered the status quo. Economists study how globalization increased the commerce and transactions between regions and territories through trade, investments, and flows of capital just to mention a few.

In this blog I’ll aim to discuss Globalization as a process and a result of the interconnectedness of human’s psycho-epistemology in specific contexts and periods of history.  My mission is to study how human behavior is not determined by nature and how human free will (action that results from rational or irrational reasonings chosen between opportunity costs) has shaped the course of history until the present.

END_OF_DOCUMENT_TOKEN_TO_BE_REPLACED 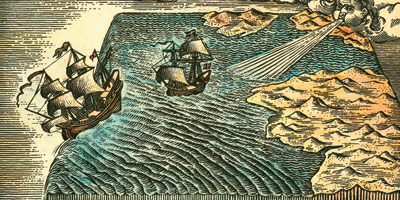 Choosing the right topic to start a blog is difficult. As a previous owner and contributor of blogs (Homo Homini Lupus RIP, Libro Libertate and Capitalismo) I’ve found that my interests were always linked to one idea: Wealth.  Indeed, Wealth has played a role in every single decision I’ve made. From choosing which book to read, starting a business or planning for my career development I’ve always been interested in a difficult topic: Wealth creation.

As such, I have decided to start my last blog in the celebration of Columbus Day.  A day like today on October 12th, 1492 the three ships leaded by the Italian sailor Christopher Columbus “discovered” America.  It is important to note that America was not discovered by Columbus, the Continent was already inhabited by millions of humans that had developed some of the richest and most educated civilizations on Earth.  However, the impact of his discovery amounted less than 50 years later to one of the major transfers of technology, institutions, crops, diseases and commerce than the world had ever seen.

The effects of Columbus discovery are still now evident and engineered one of the largest path-dependencies on history.  American soil (it started to be recognized as America until 15 years later) and its biological life was to transform forever.  Millions of humans were conquered and ruled by the Spanish, English, Dutch and French Crowns and millions of them died because of diseases transferred from Europe, Africa and Asia. Hundreds of different plants and animals were introduced and exported to and from the continent modifying forever the ecosystems of a large part of the planet.

Today, Columbus Day should represent for us that singular moment of globalization in which an infinite amount of transfers occurred.  These transfers reshaped the globe into a realm of interconnectedness never seen before.  Finally, in 1492 the six continents of the world were connected for the first time.  Today, we have benefited and suffered many changes that resulted from that historical moment.

It shall be the aim of this blog to study, discuss and identify those events that modified the course of history and emphasize which were those principles, decisions and achievements that enabled for more men to pursue happiness.  Lets us learn from the past!