I was just told about this ad campaign and I couldn’t more than agree.  Because #FirstWorldProblems are not real problems when understood in a global context,

DDB New York has created an ad for the Haitian charity “Water Is Life” that humiliates whiners on Twitter who use the “#Firstworldproblems” hashtag to complain about life’s trivial challenges.

In the video (below), ordinary Haitians — standing amid shanty huts, broken school buses and wrecked buildings — read the inane tweets of self-entitled idiots who complain about phone cords that won’t reach their beds, and leather car seats that aren’t heated.

Harris explores the notion that free will is an illusion in this nimble book (which, at 83 pages, can be read in one sitting or a couple of Metro rides), amiably and conversationally jumping from point to point. The book’s length is one of its charms: He never belabors any one topic or idea, sticking around exactly as long as he needs to in order to lay out his argument (and tackle the rebuttals that it will inevitably provoke) and not a page longer. Go to article 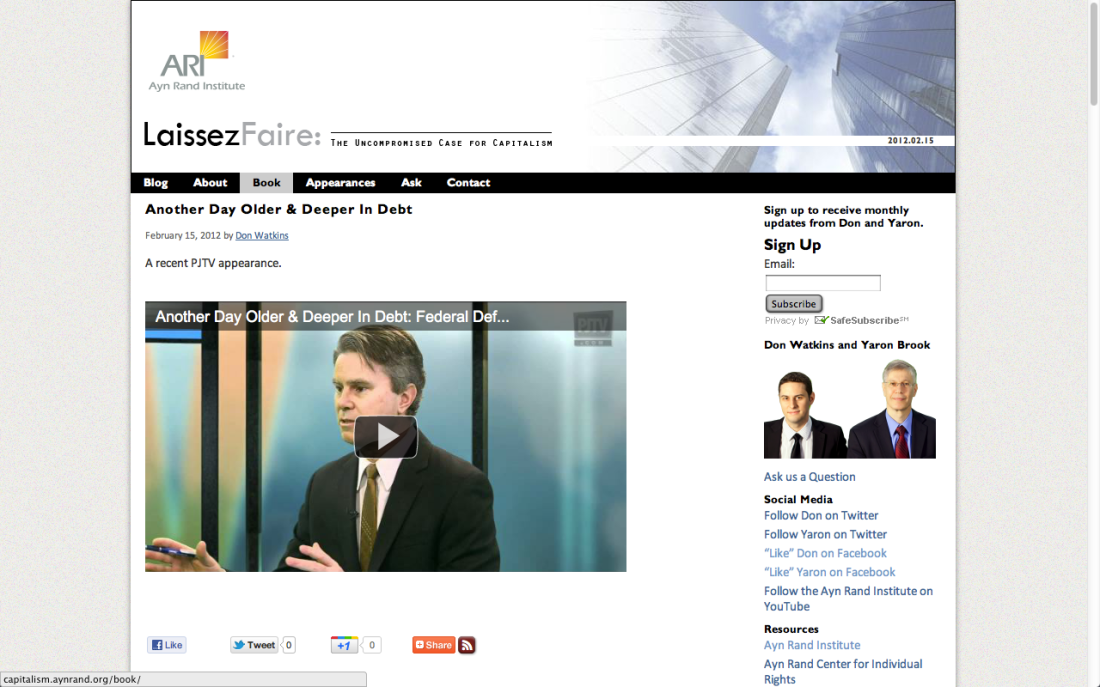 A new blog has been born for those of you interested in learning and discussing the principles of Capitalism.  The title of the blog is “Laissez Faire: The Uncompromised Case for Capitalism” and is going to be written by Don Watkins and Yaron Brook from the Ayn Rand Institute.  The blog aims to discuss the philosophic ideas that shape economic policy.

I invite you start following it and to start commenting their articles.  Indeed, this is great news for the spread of Objectivism, the Philosophy of Ayn Rand!

A copyright protects a men’s mind contribution in The purest form: ie. in the the origination of ideas. This protection allows for men to freely decide what to do with his creation: give it for free, authorize some uses of it (Creative Commons), prohibit any use of it, sell the rights to the use of the idea.

Now, this recognition of Intellectual Property automatically gives to the owner a value that he can exchange for a specific amount of money and/or recognition. To the owner, this may be the stimulus for which he made the effort of creating and innovating. Also, there are many other retributions and stimulus for men to create. F.A. Hayek mentions that it is for the sake of creation that some intellectuals work and not only for the $. He made a valid point and usually this creator give for free or with some free of charge rights the use of their ideas (via CC like in this blog).

I was shared a video that claims that,

“PROTECT-IP is a bill that has been introduced in the Senate and the House and is moving quickly through Congress. It gives the government and corporations the ability to censor the net, in the name of protecting “creativity”. The law would let the government or corporations censor entire sites– they just have to convince a judge that the site is “dedicated to copyright infringement.”

The government has already wrongly shut down sites without any recourse to the site owner. Under this bill, sharing a video with anything copyrighted in it, or what sites like Youtube and Twitter do, would be considered illegal behavior according to this bill.”

Now, censorship is “the suppression of speech or other public communication which may be considered objectionable, harmful, sensitive, or inconvenient to the general body of people as determined by a government, media outlet, or other controlling body.” You could argue that it is censorship what government officials do when they put fines or take to jail those who are violating copyright rights. But also, you can argue in a higher hierarchy that yes, the officials are taking your right to “disseminate” speech and knowledge because you are violating the rights to property of other members of society. (Remember that private property is stil one of the rights that Americans haven’t managed to completely destroy… but after Patriot Act passed, anything is now possible and the socialization of Property is soon to happen there if nothing changes.)

Now the fallacious error of this video and of the claim of those who consider that Acts like this are violating men’s right to Speech can be found in the initial argument: “PROTECT IP Act is breaking internet”

Why is this fallacious?

Just as in radio-telecommunication spectrum legislation; If someone (a company) pays the rights of use of internet from other company or government grant and this company decides to restricts the access to the network, connections, websites, etc they have acquired a right to do so.

This private right to do whatever you please in your website enables you to do anything except violating other people’s rights. Since we still consider IP to be an inalienable right, those websites that violate it should be held responsible. That would not be censorship but the recognition of a violation of rights done by a website. That is what the PROTECT IP Act aims to do.